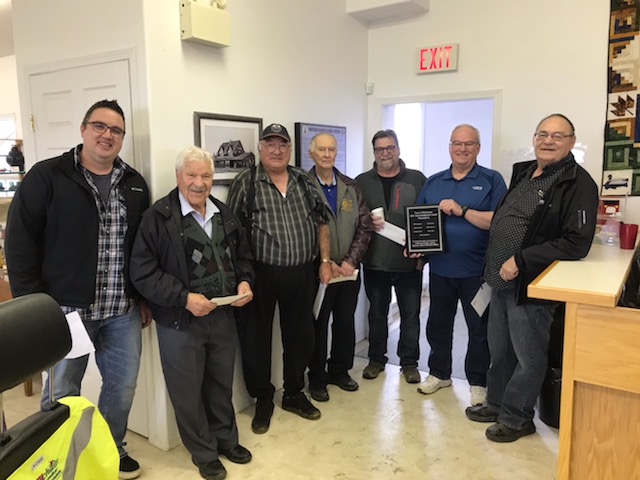 Two citizens and a community organization were recognized for their efforts and contributions to the town of McLennan during a brief ceremony on May 1st.
Dan Labreque, better known locally as “Dan the Stickman”, Doreen Potskin and members of the Northern Alberta Historical Railway Museum were honored by City Council.
Mayor Jason Doris and members of council presented the awards.
“We are here today to recognize and celebrate the backbone of our community. Volunteers!” said Doris.
“National Volunteer Week is coming to an end, but the jobs of our volunteers never seem to make it. They continue tirelessly throughout the year to dedicate time, effort and their own resources to their various projects. The come in all shapes and sizes. They cover all sorts of job types and functions. But they all have one thing in common: making our community a better place.
Doris described Labrecque, who was nominated by the McLennan Local Recreation Board for Volunteer of the Year 2021, as an “outstanding member” of McLennan.
“He doesn’t hesitate to sponsor local events and has taken it upon himself to donate his time and equipment,” said Doris.
A recent example was the fire pits and wood he supplied to the popular and well-used gliding hill last winter.
“This charitable action has not gone unnoticed and is greatly appreciated.
Potskin was nominated by the Lakeview Pioneer Society for the 2021 Volunteer Recognition Award.
“Doreen has been happy to volunteer at Second Look Boutique for over 10 years,” Doris read in the nomination.
“When at work, Doreen is friendly and always goes above and beyond to help customers find what they need.”
Potskin also spends time sorting and posting all donations and covering shifts when needed.
The nomination also cites Potskin’s sense of humor and commitment, which is appreciated by fellow staff and the community.
A third award, called the 2021 Recognition Award, was presented to the Northern Alberta Historical Railway Museum [NAHRM] volunteers Euclide Bisson, Dennis Blais, Roger Bruneau, Chris Futter, Julien Gervais, Dennis Hawthorne and Pinto Rondeau.
Doris noted that the group has been working very hard since 2019 on the old Falher station, which is now part of NAHRM.
“The group is made up of seven individuals whose combined age is 525,” Doris noted.
” Since [railway station] was moved from Falher which in itself was a huge undertaking, the building was repaired and painted inside, a new kitchen was planned and built around donated equipment for the ice cream cafe. The outer decks have been repaired, tied down and rebuilt in places. The dormitory was moved and a ramp was built to connect to the existing walkway.
“Most of the time, the group worked around four hours a day during the week,” he added. “The parking lot took hours of leveling and packing.”
And, the grass was reseeded and leveled.
The museum opened on July 1, 2021.
“Many visitors from across Canada enjoyed the displays and the ice cream,” said Doris.
“I know it’s customary to nominate one person for this award, but this group has accomplished so much that I think they should all be recognized.”
It was ironic and fitting that the award was presented in the building the band has done so much to make a reality. The board decided to hold the presentations at the museum in conjunction with its opening for the summer season.
“Volunteering is Empathy in Action” was this year’s theme for National Volunteer Week, which ran from April 24-30.
“This statement couldn’t be truer in describing our awardees,” said Doris.
“They have intertwined in our community for years and understand the needs of our residents.”